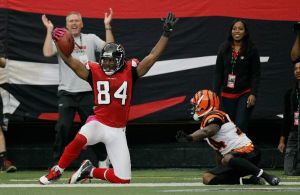 Roddy White celebrates for the Falcons against the Bengals. Photo from espn.com

It’s hard to know how good these teams are after such a strange game. Atlanta took a 24-3 halftime lead in a dominating first 30 minutes, but Cincinnati used big plays to score 22 unanswered points in the third quarter to take the lead. But the Falcons responded with two big drives to score 14 fourth-quarter points to put the game away. Atlanta is now 5-2 and at the top of the NFC standings, while the Bengals fall to 2-5 and are three games behind the Ravens and three and a half behind the Steelers in the AFC North.

On-field perspective
*Roddy White (pictured) showed in this game why he is a true No. 1 receiver in this league. Even though he’s the Falcons’ only real outside threat, he still caught 11 passes for 201 yards and two touchdowns, with a two-point conversion catch thrown in for good measure. White doesn’t get the publicity that other receivers get, but he’s just as important to the Falcons as guys like Andre Johnson or Calvin Johnson are to their teams. After a slow start to his career, White has developed into an elite player.
*While White proved once again in this game that’s he’s elite, there are still questions about whether Matt Ryan is at that same blue-chip level. Ryan showed good patience in the pocket against the Bengals, and he completed 24-of-33 passes for 299 yards, so in this game he showed his talent. But Ryan has always been better at home than on the road, and until he can take his show out of the dome, he’s not near the top-flight level of others at his position.
*The Bengals piled up  412 passing yards, and both outside receivers Chad Ochocinco (10 catches, 131 yards, 1 TD) and Terrell Owens (9 catches, 88 yards, 1 TD) put up big numbers. It was hard to tell whether Carson Palmer was favoring either outside receiver, because the modus operandi seemed to be picking on Christopher Owens outside. (That’s why Christopher Owens had 11 tackles.)
*Rookie Jordan Shipley, now that he’s healthy, is a terrific inside threat to complement Ochocinco and T.O. Shipley broke free for a 64-yard touchdown in the Bengals’ third-quarter explosion, showing great speed in the process. As he develops, he’s going to be tough for safeties to cover inside, and he could turn into a Wes Welker-esque threat.
*The Falcons defense gave up 32 points (although seven came from the Bengals D), but one underrated player impressed – DT Vance Walker. Last year, watching Falcons games unveiled Kroy Biermann to Football Relativity readers, and now we want to pump up Walker, a second-year man out of Georgia Tech. He had five tackles in this game, including one tackle for loss and another stuff of Cedric Benson. Walker’s development inside gives the Falcons another front-four threat.
*The strength of the Bengals’ defense is the secondary, and even though they let White go crazy in this game, Cincy still had two terrific plays. Leon Hall made a leaping interception of  Ryan pass to set up Shipley’s touchdown, and on the next possession Adam (Don’t call me Pacman) Jones stripped White and returned the fumble 59 yards for a touchdown. Still, the consistency was lacking in covering White, and that ended up being a huge reason the Bengals fell to 2-5.
*It didn’t decide the game, but the Bengals made a mistake by going for two points when they scored a touchdown to make it 24-19. They failed on that pass, and after scoring another touchdown failed again, so that they led 25-24 instead of leading by three. The Falcons later made a two-point conversion, and the difference ended up being a field goal. Chasing a two-point conversion to trail or lead by a certain amount is unwise until the fourth quarter, but the Bengals fell into that mindset. (The one exception comes when a team has a chance to tie a game via a two-pointer, as the Dolphins did against the Steelers. But instead of going for two, Miami kicked and trailed 17-16, and ended up losing by one after the teams traded field goals the rest of the way. Anytime a team has a chance to go for two to tie, we believe it should do so.)

Fantasy Football perspective
*While White is an elite receiver and a no-doubt No. 1 fantasy receiver, no one else in the Falcons’ passing game is a starter. That includes TE Tony Gonzalez, who had just two catches in the game and was rarely targeted. There are better under-the-radar tight end options to start now than Gonzalez despite his name value.
*It’s hard for fantasy owners to make the call about who’s better, Owens or Ochocinco. Both players produced this week, and there’s always the chance for that to happen, especially if the Bengals fall behind. Both players fall into the second dozen of fantasy receivers.
*Both Michael Turner and Cedric Benson ran for more than 100 yards in this game, and both remain solid every-week fantasy starters.