Rivera runs through it to Carolina 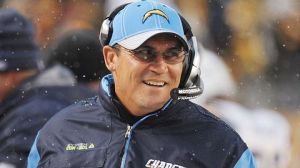 The Carolina Panthers settled their head-coaching search Tuesday, agreeing to hire Ron Rivera as the franchise’s fourth head coach. Below are some thoughts on the hire; we’ll compare it to others thus far this offseason in a post later this week.

Rivera has long been a coaching bridesmaid – he’s been connected to at least 12 openings since 2006 – before he finally landed a head-coaching perch in Carolina. It’s easy to see why Rivera has drawn interest. He has been a successful defensive coordinator both in a 4-3 system (with Chicago) and a 3-4 (with San Diego). He’s learned from the hyper-aggressive Jim Johnson in Philadelphia and the conservative Lovie Smith in Chicago. So from an Xs and Os standpoint, he’s as versatile as defensive coaches come. He also has a strong personality who gets along with the media – he once was a Bears TV analyst – and should connect with fans. The question is whether he can fix the offensive problems that plague the Panthers. Carolina has decent defensive talent, and Rivera should help to unleash guys like Jon Beason and Everette Brown. But can Rivera fix the Panthers’ offensive problems? Can he hire the right offensive coordinator to either develop Jimmy Clausen or find a true quarterback of the future? These are questions that only time will answer. Rivera’s staff will be key to his success, and until those hires go through, Rivera’s uphill battle against Sean Payton, Mike Smith, and Raheem Morris in the NFC South looks even steeper. This is a solid hire by the Panthers, but the organization must let Rivera hire the offensive staff he needs or else success won’t be flowing Rivera’s way.