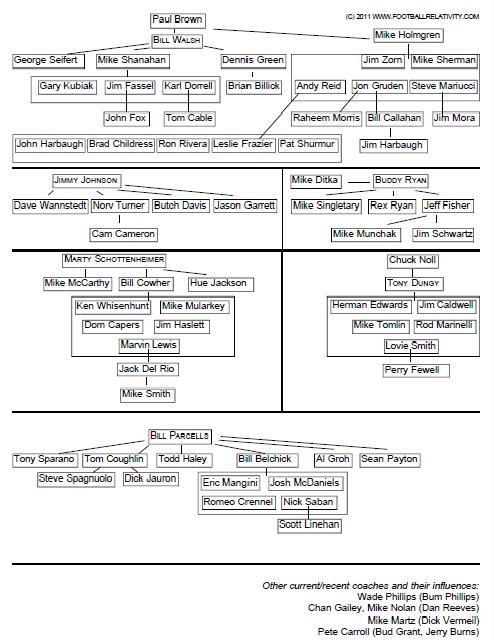 In the two-plus years that Football Relativity has existed, the most popular post we’ve ever done is our Coaching Trees research project. It has shown up in more searches and led to as much discussion as anything we’ve ever done. In this project, we broke down the influences of all the NFL head coaches to determine what the most prominent coaching trees were.

But there have been two head-coach hiring cycles since we put together the project. So we thought we’d update our coaching trees graphic and add the head coaches hired in the last two years. We’ve assigned 10 head coaches (nine permanent, one interim) to trees. Here’s why we added them where we did:

2010 hires
Pete Carroll – Carroll has bounced around enough that he’s hard to categorize. In many ways, a lot of his success is due to Monte Kiffin and Earle Bruce, whom he coached under in college. He coached under Bud Grant and then Jerry Burns with the Vikings and then worked as Bruce Coslet’s  defensive coordinator with the Jets before succeeding Coslet as head coach. After the Jets jettisoned him, Carroll went to work for George Seifert in San Francisco and then became coach of the Patriots. Of course, Carroll rebuilt his career with a great run at USC before moving to the Seahawks. We’ve included Carroll in the coaching tree of Grant and Burns, since they were the first ones to give him an NFL shot.

Chan Gailey – The career of Gailey, now head coach of the Bills, is a strange one, with key stops at then-Division II Troy State and also in the old World League of American Football. His last stop before getting his first head-coaching chance in Dallas was as the offensive coordinator in Pittsburgh under Bill Cowher, but we’ve included Gailey under his first NFL boss, Dan Reeves, whom Gailey worked for in Denver. We made that determination since Gailey is far more known for his offensive play-calling prowess than for his Cowher-esque defensive approach.

Perry Fewell – Fewell was only an interim head coach in Buffalo, but his repeated presence as a head-coach interviewee makes him worth including in this exercise. Fewell started his coaching career in college and got his first pro shot in Jacksonville, but it was Lovie Smith who gave him his best opportunity in St. Louis and Chicago. Since then, Fewell has been a coordinator in Buffalo and with the Giants, in addition to his interim chance with the Bills. He is the first branch off Lovie Smith, which makes him part of the massive Tony Dungy tree.

2011 hires
Leslie Frazier – We were tempted to include Frazier (and a couple of fellow 2011 hires) under Mike Ditka’s tree, since he (and Ron Rivera and Jim Harbaugh) all played for Da Coach. But instead, we’ve included Frazier under the Andy Reid tree. Frazier’s career started as head coach of Division III Trinity College, and then he coached at the University of Illinois. Then Reid brought Frazier in as the Eagles’ defensive backs coach. After four years in Philadelphia, Frazier got his first coordinator’s job with the Bengals under Marvin Lewis. Frazier also worked for Tony Dungy as the Colts’ DB coach before moving to Minnesota as Brad Childress’ defensive coordinator. Since Childress comes from Reid’s tree as well, we believe that this is the most appropriate place to include Frazier on our coaching tree chart.

Ron Rivera – Rivera, like Frazier, played for the 1985 Bears, and his first shot at coaching was as a quality control coach for the Bears. But like Frazier, his first chance as an NFL position coach came in 1999 with the Eagles, when Andy Reid was hired. Both Frazier and Rivera learned from the late Jim Johnson at that time. After five years with the Eagles, Rivera moved back to Chicago to be Lovie Smith’s defensive coordinator, but Rivera and Smith never meshed in terms of defensive style. That led Rivera to San Diego, where he worked as linebackers coach and then was promoted to spend three years as defensive coordinator under Norv Turner. We’re including Rivera, like Frazier, under the Andy Reid tree, and with both additions Johnson gets a nod for being a defensive influence.

Jim Harbaugh – Harbaugh played in the NFL for years, entering the league with the Bears under Mike Ditka before playing key roles in San Diego and Indianapolis. But his NFL coaching experience is limited to two years as the quarterback coach in Oakland under Bill Callahan after Jon Gruden left. Harbaugh then became a college coach before joining the 49ers this offseason. In truth, Harbaugh should be under his father Jack’s tree, but since we didn’t include his brother John there, we’ve added Callahan and then Harbaugh under Jon Gruden in the Mike Holmgren branch of the Bill Walsh tree.

Jason Garrett – As a coach, Garrett has worked for Nick Saban with the Dolphins and Wade Phillips with the Cowboys. But in many ways, he already had his offensive identity before working for either coach. So we’ve included Garrett in the tree of Jimmy Johnson, for whom he played for seven years in Dallas. Garrett was the prototypical third quarterback – a player-coach who seemed to know the offensive inside and out, which gave him the ability to keep things straight despite inferior physical talent for an NFL quarterback. At first glance, that’s what helped Garrett develop his coaching style, and so we put inside Johnson’s tree.

Pat Shurmur – Shurmur comes from a coaching family (his uncle Fritz was a long-time NFL defensive coordinator), but his coaching legacy falls under Andy Reid. After eight years as a college assistant under Nick Saban at Michigan State (and one more year at Stanford), Shurmur spent 10 years as quarterbacks coach under Reid. He got a promotion to move to St. Louis as offensive coordinator, which is where he got the Cleveland Browns job. Since Shurmur was hired for his West Coast offense credentials, he naturally fits as an offshoot of Reid more than Saban.

Mike Munchak – Munchak, the new Titans coach, has spent his entire career with the Oilers/Titans franchise, first as a Hall of Fame player, and then as an assistant coach. And the Oilers/Titans had just one coach during that time – Jeff Fisher. So Munchak joins Jim Schwartz as a branch off of the Fisher tree, which falls under the Buddy Ryan tree.