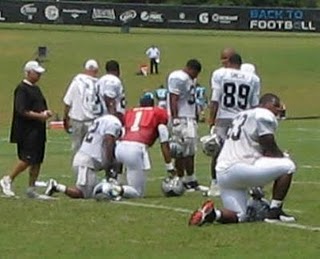 For National Football Authority, we discuss the Patriots’ defensive line additions and what they tell us about the team’s defensive plans in 2011. Click here to read more. (link fixed)

In this post, we’ll discuss the players released during training camp. This will include players cut until the first cutdown on August 30. (For players released earlier, check out this link to our pre-camp cuts analysis.)

Cowboys (cut C Andre Gurode) – Gurode has made the Pro Bowl the last five years, but the nine-year vet’s play no longer matches his price tag. It’ll be interesting to see what contingency plan the Cowboys have in mind, but it’s clear that Gurode still has enough in the tank to be at least an above-average center for someone.

Bills (cut OLB Aaron Maybin) – Maybin, a former first-round pick, was an utter disappointment in Buffalo. He never provided much of a pass rush, and so his impact was negligible. His talent may earn him a look elsewhere, but it’s hard to see someone who was such a complete bust completely turning his career around. The Bills, under a regime different than the one that drafted Maybin, cut the cord after two seasons, indicating they thought he was a hopeless case.

Jets (cut WR Jerricho Cotchery) – Cotchery has been a decent starter for the Jets, but after the Jets spent big money for Santonio Holmes and Plaxico Burress, his price tag proved to be too much. So the Jets (who also lost Braylon Edwards and Brad Smith) will likely try to add a veteran as the third receiver until Jeremy Kerley develops. Cotchery latched on with the Steelers.

Saints (cut OT Jon Stinchcomb and DE Alex Brown) – Stinchcomb had started every game at right tackle the past five seasons for the Saints, and he made a Pro Bowl just two seasons ago in 2009. But his play slipped last year, and he’s not the heavy-duty run blocker the Saints seem to prefer at this point. So New Orleans saved $2 million plus and released him. Still, he’s good enough to start elsewhere, especially for a West Coast offense team. Brown, whom the Saints added last season, is a decent starting defensive end because he’s OK against both the pass and the run, but he’s no longer an impact guy. He lost his job as the Saints upgraded across the D-line and his pricetag no longer matched his expected contribution.

Bengals (cut DT Tank Johnson, CB Fred Bennett and QB Jordan Palmer) – The Bengals gave the troubled defensive tackle a chance, and it worked out beautifully in 2009. But last season, Johnson’s performance fell off. If he can prove he’s healthy and stay on his best behavior, Johnson could still latch on as a backup DT elsewhere. Bennett, a former Texans starter, has completely fallen off the map. Palmer (the brother of Carson Palmer) lost a roster spot after the additions of Andy Dalton and Bruce Gradkowski.

Titans (cut DT Jovan Haye) – Haye was a starter for the Titans in 2008-2009, but he lost his starting gig last year and then lost his roster spot this year. Still, he provides experience at a position of need, so he should find a job somewhere.

Broncos (cut RB LenDale White) – The Broncos signed White after the Titans and Seahawks gave up on him, but he got hurt last preseason and missed the entire year. After adding Willis McGahee, White became expendable for Denver.

Steelers (cut WR Limas Sweed) – Sweed, a former second-round pick, was supposed to replace Plaxico Burress in the Steelers’ offense, but injuries and inconsistency limited his impact. Instead, later draftees like Mike Wallace, Emmanuel Sanders, and Antonio Brown emerged, making Sweed extraneous. Some team will really be looking at the way-back machine if it is to give him a second chance.

Ravens (cut FB Jason McKie and OT Oniel Cousins) – McKie is a decent fullback, but after the Ravens upgraded with Vonta Leach, he became expendable. Given the dearth of teams that use a fullback, McKie could have trouble finding work. Cousins entered camp as a potential starter at right tackle but lost the job and then a roster spot. The addition of Bryant McKinnie made Cousins an expendable piece.

Eagles (cut DE Ricky Sapp) – Sapp, a fifth-round pick in 2010, was battling knee injuries and roster depth before he left the Eagles early in camp. Given their depth, the Eagles decided to cut Sapp instead of keeping his rights.

Patriots (cut safeties Brandon McGowan and James Sanders) – McGowan, who was a starter at free safety for the Patriots in 2009, had fallen behind youngsters Patrick Chung and Brandon Meriwether at the position. So he was released. The more surprising cut was Sanders, who was a starter and a regular last year and a starter in the third preseason game two days before his release. He’s still good enough to fit in somewhere.

Redskins (cut PK Shayne Graham) – Graham lost out in a kicking competition with Graham Gano. The vet will likely become an injury replacement somewhere before the season is out.

Rams (cut LBs David Vobora and Na’il Diggs) – Vobora, a former Mr. Irrelevant, was a stat-minded favorite, but his talent wasn’t going to justify a roster spot. It’ll be interesting to see if an analytics-driven team gives him a shot. (UPDATE: Seattle did.) Diggs is a solid veteran who is a replacement level starter at best. He will find work as an injury fill-in at some point.

Lions (cut RB Mike Bell, DT Montavious Stanley, and PK Dave Rayner) – Bell, one of the running backs whom the Lions signed after Mikel Leshoure’s injury, failed to make an impact to win a job. Stanley provides decent depth at tackle but lost a job on Detroit’s deep line. Rayner did a good job filling in for Jason Hanson last year, but Hanson’s back for his 20th year in Detroit.

Jaguars (cut WR Tiquan Underwood) – Underwood, a former sixth-round pick, becomes the first draft pick of the Gene Smith era to be cut in Jacksonville. His three years were underwhelming, and the Jags have added a ton of other receivers in the draft since he was selected.

Bears (cut DE Vernon Gholston and DT Tank Tyler) – Tyler, an ex-Chief and Panther, has never lived up to his draft status as he’s bounced around the league. But he’s not nearly the bust that Gholston, a former sixth overall pick, was. The Bears took a shot on Gholston as a reclamation project, but it obviously didn’t take. (Meanwhile, Amobi Okoye, a similar case, has performed pretty well.)

Chargers (cut LS David Binn) – Binn played 17 years for the Chargers, but he’s always been small for a long snapper and no longer holds up. The Chargers’ special teams problems last season ultimately led to many changes, including this one.

How will Eagles adjust after offseason additions?

In our latest piece for National Football Authority, we discuss the struggles the Eagles could have to integrate all their big-name offseason additions. And we zero in on the one unit that should struggle the most. Click here to find out what the Eagles need to do to turn their free-agency success into success on the field. 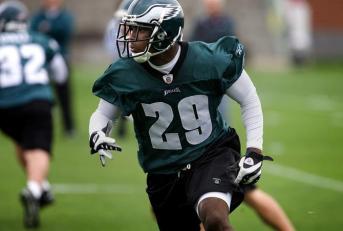