Let’s reflect on a upset-filled Saturday of wild-card games to open the NFL playoffs.

Seahawks 41, Saints 36
*Matt Hasselbeck isn’t an elite quarterback, especially not at this point in his career, but he showed Saturday that he can still get incredibly hot and carry a team. His four-TD performance featured some beautiful deep throws to Brandon Stokley, Mike Williams, and Cameron Morrah, and he only turned the ball over once against a Saints defense that will give up yards for turnover opportunities. That performance allowed the Seahawks to overcome a 10-point deficit and build a lead.
*Once the Seahawks built a lead, Marshawn Lynch put the game away with an incredible 67-yard touchdown run on which he broke six tackles and eluded a couple others. That run showed Lynch at his best, after a career in which he was good, not great, in Buffalo, and simply mediocre for the Seahawks. But Lynch showed up incredibly at a crucial time with this run.
*Raheem Brock came up big for the Seahawks again. His solid season turned into a good one with 2.5 sacks and a forced fumble against the Rams in a win-or-else Week 17 game, and Brock showed up big again with a sack and a forced fumble to help the Seahawks turn the game around in the second quarter.
*S Roman Harper was the goat for the Saints. He got suckered on two big plays, John Carlson’s second TD catch and on Stokley’s big TD catch. He’s not the only defensive player who struggled, but he didn’t help the cause.
*The Saints’ inability to run the ball effectively really stung them in this game. Julius Jones had 59 yards and two touchdowns, but he also had a key fumble and didn’t make yards that weren’t blocked for him. Missing Chris Ivory and Pierre Thomas, among others, came back to bite the Saints.
*I’m so glad that we got Mike Mayock as the color analyst for the game instead of blowhard Joe Theismann, who butchered the Jets/Bengals playoff game last year. Mayock isn’t flashy, but he sees the game well and stays away from the grand pronouncements that Theismann makes whether or not they’re true. Now that Mayock, who is the NFL Network draft expert, does Notre Dame games on NBC, the Peacock network actually has a great option for a No. 2 team that they don’t need at any time all year. And for that, we are thankful. 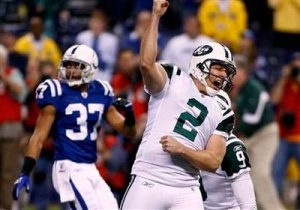 Jets 17, Saints 16
*The key to this game kind of flew under the radar, but it happened on two third-down plays in the second half. Peyton Manning made the “right” decision at the line, based on the defense, by calling running plays, but Dominic Rhodes was stuffed on a third-and-1 and a third-and-7. As a result, the Colts got two field goals and trailed 14-13 instead of getting a touchdown in either spot. Manning is significantly better than either Rhodes or Joseph Addai, and we believe Manning should have taken the game into his own hands on at least one of those plays, instead of simply making the “right” play call.
*The Jets have to be encouraged by their running game, which controlled the ball throughout the second half. LaDainian Tomlinson ran for 82 yards and two touchdowns, and Shonn Greene ran for 70 yards. The Jets’ running game isn’t as unstoppable as it was in last year’s playoffs, and the Colts’ defense is so banged up and inexperience at linebacker that the Jets should have gouged it, but the trend is still a huge plus for Gang Green.
*Antonio Cromartie could have been the goat for the Jets, after giving up a long touchdown play to Pierre Garcon along with several other big catches, but his two kickoff returns in the second half were monstrous. His 41-yard return to start the second half helped to set up the Jets’ first touchdown, and his 47-yard return in the game’s final minute keyed the drive for the game-winning field goal.
*The Colts were not that talented in this game, after losing key skill-position players and a raft of secondary players. The question is whether the Colts can add talent and, as importantly, depth in time to rally in 2011. If not, we could be seeing the denouement of a great decade in Indianapolis.