We hit our seventh pick in a row this week. Now it’s time to go back to the Thursday-night well. Here are this week’s picks:

1. San Diego over San Francisco – The 49ers’ offensive explosion last week gives us pause, but when we look at this matchup we still believe the 7-6 Chargers are several notches better than the 5-8 49ers. Philip Rivers doesn’t have his full cadre of targets, but he’s continued to put up crazy numbers on a week-in, week-out basis. Plus, it’s far more likely for Alex Smith to turn the ball over to the Chargers than to light up the scoreboard against the Bolts. Being at home on a short week is another plus. For all these reasons, the Chargers are this week’s prime pick.

2. Tampa Bay over Detroit – The Lions have remained competitive despite a 3-10 record, as last week’s win over the Packers showed. But Tampa Bay has done a remarkable job of beating teams worse than them all season, and Detroit still falls into that category. Even though the Bucs are really decimated by injuries, they’re still good enough to take advantage of Drew Stanton and the Lions’ sadsack secondary and to claim a home win.

3. New England over Green Bay – If Matt Flynn has to start for the concussed Aaron Rodgers, there’s just no way the Pack can score enough points to keep up with the high-flying Patriots. New England is in top form right now, and that top form is better than any other team in the league has showed all season. That makes the Pats a safe pick if they’re still an option for you and your team.

Traps to avoid: Atlanta at Seattle, Miami vs. Buffalo – The Falcons have been playing as well as anyone in the league, but going across the country and winning in Qwest Field is never a guarantee. It’s better to stay away from the Falcons in this spot. The Dolphins, meanwhile, are better than the Bills, but Miami has been horrible at home this year, which makes this pick more dangerous than it would appear on the surface. 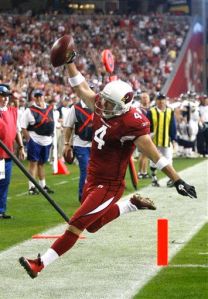 It took most of the season, but we finally had a kicker find the end zone in Week 14. Jay Feely of the Cardinals lined up for a 23-yard field goal attempt late in the first half of Arizona’s game against the Broncos. But instead of placing the ball for Feely to kick it, holder Ben Graham tapped the ball on the ground and then pitched it behind him to Feely, who was motioning right and went around the right side and snuck into the end zone for a five-yard scoring rush. The touchdown gave the Cardinals a 13-3 lead en route to a 43-13 win. Feely added a five field goals, including a 55-yarder, for an extra dose of craziness.

For his scoring scamper, Feely is the Crazy Kicker of the Week.