Each week, we preview teams that are moving up and moving down in our weekly Football Relativity comparison. We’ll analyze all 32 teams on Tuesday.

Rise – Indianapolis Colts – The Colts’ offense rebounded nicely on Thursday night against the Titans, and even if the defense nearly surrendered a big early lead, the 30-point output was a sight for sore eyes. The Colts still trail the Jaguars in the AFC South, but the offensive explosion lets us know that Indy will at least be in the conversation down the stretch. 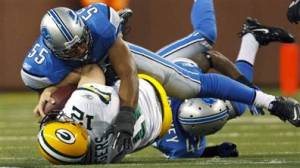 Sink – Green Bay Packers – You can’t really blame the Packers for losing a game in which superstar QB Aaron Rodgers was knocked out of the game, but if Rodgers has to miss next week’s game with a concussion, the Pack will undoubtedly take a step back. Matt Flynn simply isn’t good enough to put up major offensive numbers, so even if the defense plays well (as it did in the 7-3 loss at Detroit), Green Bay is in trouble. And with a trip to New England next week, followed by home games against the Giants and Bears, the Pack needs Rodgers to help them to some wins lest the playoffs slip away.

Float – Tampa Bay Buccaneers – It wasn’t pretty, but Josh Freeman led the Bucs to another come-from-behind victory that was punctuated by a botched extra point to clinch a 17-16 win in Washington. The Bucs aren’t an elite team, but they’re good enough to take care of business against mediocre squads, and the schedule sets up for another two or even three wins down the stretch. That would be enough for a playoff berth. Whether or not it happens, the Bucs have taken major strides forward this season.