Each week, we preview teams that are moving up and moving down in our weekly Football Relativity comparison. We’ll analyze all 32 teams on Tuesday. 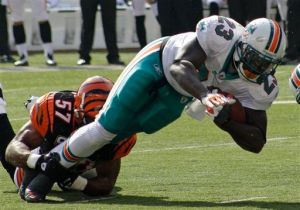 Ronnie Brown of the Dolphins against the Bengals. Photo via espn.com

Rise – Miami Dolphins – We believe in the Dolphins, and all the more so after they bounced back from a 14-3 deficit to put up a 22-14 road win in Cincinnati over the Bengals. The Dolphins have faced a brutal schedule, and the fact that they’ve gotten to 4-3 despite it is a testament to their chops. Miami is going to be in the playoff hunt throughout the year, and

Sink -Dallas Cowboys – The Cowboys played a trick on their fans on Halloween, laying a complete egg in a 35-17 home loss against the Jaguars. Backup QB Jon Kitna threw four interceptions, although three of those were tipped or dropped by his receivers. The Cowboys have talent, but at this point they’re the most obviously undisciplined team in the league. That has killed their playoff hopes, made Wade Phillips a firing-line certainty, and proved that it takes more than talent to win in the NFL.

Float – New York Jets – The Jets saw their five-game winning streak fly away in a 9-0 home loss to the Packers. It was the first game of the year in which turnovers, a bugaboo last year, really hampered the Jets. But that can be chalked up as a bad game, and we still believe the Jets remain among the NFL’s scariest team. Now, they know exactly what their Achilles heel is and the kind of game they must play to win.