Each week, we focus on one game and share our thoughts on it, both from an on-field perspective and a fantasy football perspective. This week, it’s the battle of AFC titans as Baltimore visits New England. The Patriots rallied from a 10-point fourth quarter deficit to record a 23-20 overtime victory. 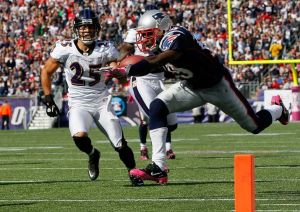 On-field perspective
*The Ravens made themselves much better in the offseason with the additions of WRs Anquan Boldin and T.J. Houshmandzadeh. Boldin is a legitimate No. 1 receiver who can operate inside or outside, and he showed again in this game with a 25-yard touchdown catch that he can break deep as well. Houshmadzadeh doesn’t have those skills anymore, but he had an incredibly patient run after catch for a big gain on the first drive, and those skills deepen Joe Flacco’s options.
*With Boldin, Houshmandzadeh, Derrick Mason, and TE Todd Heap, Flacco has a cadre of experienced receivers with hundreds of catches on their resumes, but these guys can still perform. Baltimore has never been this scary in the passing game, and it’s no wonder Flacco completed 21 of his first 25 passes with this crew.
*In the absence of Randy Moss, the Patriots spread the ball around but still did a good job passing. Deion Branch had a touchdown in his return to New England, along with seven catches between the fourth quarter and overtime, while Wes Welker moved the chains as normal. But the breakaway ability is going to have to come from youngsters WR Brandon Tate and TE Aaron Hernandez. Both made a few plays in this game, but their consistency will be key if the Pats are going to get their offense running at full throttle without Moss.
*Props to Vince Wilfork for moving from nose tackle to defensive end to help the Patriots out. With Ty Warren out, Wilfork moved outside even though his study/rotund body type doesn’t really look the part out there. Still, his ability to play outside as well as inside allows the Pats to put their best three guys on the field up front.
*Ravens DE Haloti Ngata is a big-time player, and his late-game sack that stymied a Patriots’ game-winning attempt in regulation was the kind of huge play that big-time players make. He had two sacks in the game.
*The Ravens showed some vulnerability up the middle in the passing game in this one. They need Ed Reed to return as expected to patrol the middle of the field. Reed is eligible to return from the PUP list to the field for Baltimore’s next game.
*Perhaps the play of the game was Patriots P Zoltan Mesko’s 65-yard punt halfway through overtime. It flipped field position and put the Pats in position to get the game-winning field goal. It just goes to show that, when it comes to this rookie, you don’t mess with the Zoltan.

Fantasy Football perspective
*It’s risky to make assessments of Patriots players off of just one game, because their production is so dependent on the game plan, but after the show that Hernandez put on, it’s easy to forecast the rookie as a top-10 fantasy tight end. More than fellow rookie Rob Gronkowski, Hernandez has the ability to make big plays. He had three plays of 18 yards or more in this game.
*BenJarvus Green-Ellis is ostensibly the Patriots’ No. 1 running back at this point, and he had a touchdown in this game. But he’s not going to get a bunch of carries unless the Pats get a lead and try to sit on it. That keeps him outside of the top 20 among fantasy runners. And when another guy gets going, like Danny Woodhead did in this game, Green-Ellis’ touches will suffer.
*Branch was a factor in his first game back with the Patriots, grabbing a touchdown catch in the fourth quarter and nine catches. That’s a good sign for fantasy owners who grabbed Branch hoping for some value. He’s going to be a solid flex option going forward, and he could emerge as even more. If he’s still on the waiver wire in your league, go ahead and put in a claim.
*Mason led the Ravens with 100 receiving yards in the game, but he’s still hard to put inside the top 30 among fantasy wideouts. Don’t get carried away and put Mason into your starting lineup based on this performance.

One response to “Ravens/Patriots thoughts”