Which fantasy football performances from the Sunday Week 2 action should you take seriously, and which can you chalk up as one-week frauds? Let’s take an in-depth look. With each applaud or a fraud designation, we explain what action you should take. 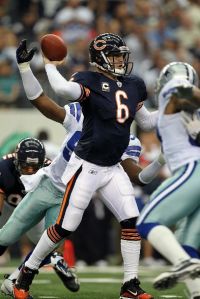 Jay Cutler, Bears – Cutler threw for 277 yards and three touchdowns against the Cowboys, and in this game he was incredibly efficient, completing 21-of-29 passes. He’s started the season well in Mike Martz’s new offensive system, and now it’s safe to say that Cutler will end up as a top-10 fantasy quarterback. Cutler owners should feel comfortable starting him over guys like Joe Flacco, Carson Palmer, and Brett Favre who were ranked around him before the season. Verdict: Applaud

Bruce Gradkowski, Raiders – After the Raiders benched Jason Campbell at halftime, Gradkowski came off the bench to lead Oakland to a 16-14 win over the Rams. Gradkowski threw for 162 yards and a touchdown (with one interception). He doesn’t have the fantasy upside that Campbell has because he doesn’t throw the deep ball as well, but Gradkowski may be worth considering as a bye-week fill-in in larger leagues if he claims the starting job permanently. For now, though, take a pass. Verdict: A fraud

Kyle Orton, Broncos – Orton threw for 307 yards and two touchdowns against the Seahawks, after a 295-yard performance in Week One. If he can continue to post those kinds of yardage numbers, he becomes a borderline starter in 12-team leagues. He’s still kind of a risky play, because we don’t trust him to put up these kinds of numbers all season long. But he had an extended hot streak to begin last season, and so if you want to ride him as a starter right now, we won’t argue. Verdict: Applaud

Jahvid Best, Lions – Best scored two touchdowns for the second straight game, but in Week 2 he did so with major yardage numbers -78 rushing and 154 receiving. He has the look of a fantasy superstar and a guy who should be in your starting lineup every week as long as he’s healthy. Verdict: Applaud

Tim Hightower, Cardinals – Hightower piled up 115 rushing yards and had the Cardinals’ only touchdown against the Falcons, but remember that Beanie Wells was almost ready to return to action this week. When Wells returns, Hightower becomes a borderline flex option instead of a fantasy starter. We hope Hightower owners took advantage of Wells’ two-game sabbatical, but don’t get carried away with Hightower’s value. Verdict: A fraud

Peyton Hillis, Browns – Hillis has scored touchdowns in his first two games, and even though he’s averaging just 63 yards from scrimmage in the first two games, he does appear to have the Browns’ goal-line role. That makes him worth at least owning as an emergency fill-in, because he’s liable to score most weeks. We’d actually rather own Hillis than James Harrison, who’s had two subpar games. If Hillis is on the waiver wire in your league, go ahead and grab him. Verdict: Applaud

LeSean McCoy, Eagles – McCoy had a monster game against the Lions’ porous defense, running for 120 yards and three touchdowns. He hasn’t shown that kind of propensity to get in the end zone at other times in his career, but with Kevin Kolb still questionable next week because of his concussion, McCoy remains a solid fantasy starter with good upside. Verdict: Applaud

Darren McFadden, Raiders – With Michael Bush sidelined for a second straight week, McFadden once again put up big numbers, running for 145 yards. After two games with 150 yards from scrimmage, McFadden is a good bet to remain the starter even after Bush returns. His yardage totals may slip a little, but McFadden should put up enough numbers to be at least a flex-quality play. Is the former top-5 pick actually starting to live up to his potential? Maybe so. Verdict: Applaud

Jason Snelling, Falcons – Snelling had 186 yards from scrimmage and three total touchdowns against the Cardinals, but he got an unusual amount of work because Michael Turner (who had 75 rushing yards) suffered a groin injury. But initial reports are that Turner should be fine next week, and that means Snelling isn’t going to be more than a Turner handcuff or a No. 4 fantasy back. Snelling has a lot of talent, but as long as Turner is around he won’t have the opportunity to be a big fantasy contributor. Verdict: A fraud

Mike Tolbert, Chargers – With Ryan Mathews suffering an ankle injury, Tolbert, the Chargers’ fullback, became a featured runner and delivered 82 yards on 16 carries with two touchdowns. Given Mathews’ fumbling issues, it’s entirely possible that Tolbert will continue to get a fair share of carries even if Mathews is healthy. And if the rookie is hurt, Tolbert becomes a must-add. Either way, he’s worth a claim this week. Verdict: Applaud

DeSean Jackson, Eagles – After a disappointing opening game with just 30 receiving yards, Jackson blew up with 135 yards and a touchdown against the Lions. We still believe he’s an every-week fantasy starter, whether Kevin Kolb or Michael Vick is throwing the ball. Verdict: Applaud

Louis Murphy, Raiders – Murphy had a solid game against the Rams with 91 receiving yards and a short touchdown. We believe he has the most value of any Raiders’ wideout, and that makes him ownable in leagues of 12 teams or more. But he’s a backup, not a starter, for fantasy teams right now. Maybe things will change if Bruce Gradkowski remains the Raiders’ quarterback, but for now Murphy is simply a depth player. Verdict: A fraud

Mike Sims-Walker, Jaguars – After a catchless Week One, Sims-Walker delivered 105 yards and a touchdown in Week Two. He has the potential to put up big numbers in any week, but his inconsistency will bedevil fantasy owners. He should be a fill-in, not a starter, in 10- and 12-team leagues. Don’t get sucked back in after this week. Verdict: A fraud

Demaryius Thomas, Broncos – After missing the season opener, Thomas, one of the Broncos’ first-round picks this season, exploded for eight catches, 97  yards, and a touchdown against the Seahawks. It will be no surprise if Thomas ends up being Denver’s No. 1 receiving option over proven journeymen like Eddie Royal and Jabar Gaffney, and that would give Thomas fantasy value. Claim Thomas now if he’s available in your league. Verdict: Applaud

Kevin Walter, Texans – The buzz was behind Jacoby Jones this offseason to take over Walter’s role in the Texans’ high-powered offense, but Walter has delivered touchdowns in the first two games, and he had 144 yards in Houston’s wild 30-27 overtime victory in Washington. So reports of Walter’s demise have been greatly exaggerated. Walter remains a No. 3 fantasy receiver in 12-team leagues who is worth starting-lineup consideration most weeks. Verdict: Applaud

Nate Washington, Titans – We explained why two touchdowns in two weeks isn’t reason to pick Washington up in our Steelers/Titans post. Verdict: A fraud

Mike Williams, Buccaneers – The rookie has scored in his first two career games, and he’s established himself as the Bucs’ best outside threat. He’s not an every-week starter, but once bye weeks start this Mike Williams can be a useful fill-in. Don’t be afraid to start him. Verdict: Applaud

Aaron Hernandez, Patriots – Hernandez broke the century mark with a 101-yard, six-catch day against the Jets. His numbers were skewed upward by the Patriots’ late comeback attempt, but the performance does show Hernandez’ talent. However, fantasy owners should remember that fellow rookie TE Rob Gronkowski has had his share of good games in the preseason as well, and that means Hernandez’s big games will be impossible to predict. That means Hernnandez should stay on the waiver wire in your league. Verdict: A fraud

Dustin Keller, Jets – Keller had a huge game against the Patriots, posting 115 receiving yards and a touchdown. It seems like whenever Mark Sanchez plays well for the Jets, Keller benefits. That makes Keller a solid play as a low-end starter in a 12-team league. His performance will still show some inconsistency, but we can endorse Keller as an upside play in your lineup. Verdict: Applaud

Tony Moeaki, Chiefs – After scoring a touchdown in his first NFL game, Moeaki had five catches for 58 yards against the Browns in Week 2. He’s not worth a claim, but Moeaki bears watching to see if he emerges as a sleeper at tight end. If you’re in a massive league, go ahead and make the claim now just in case, but owners in most leagues should wait until bye weeks make tight ends more scarce. Verdict: A fraud

Brandon Pettigrew, Lions – After notching just one catch for six yards in the opener, Pettigrew exploded for 108 yards on seven catches against the Eagles. But those numbers were skewed upward by the Lions’ comeback attempt. You can’t expect Pettigrew to be a major yardage producer on a weekly basis with threats like Calvin Johnson and Jahvid Best getting the first looks each week. He’s not a starting tight end, even in 16-team fantasy leagues. Verdict: A fraud 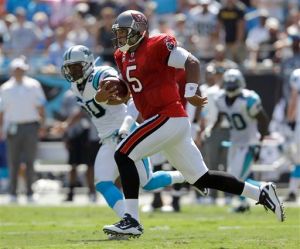 Each week, we highlight three NFL teams and preview where they’ll go in the upcoming Football Relativity comparison. We’ll identify one team that’s rising, one that’s sinking, and one that’s floating at the same level. The full comparison with analysis of all 32 teams comes out Tuesday.

Rise – Tampa Bay Buccaneers – Don’t look now, but the trend of worst to first in the NFC South isn’t the crazy thought it was a few weeks ago. Tampa is off to a 2-0 start, and second-year QB Josh Freeman built off last week’s come-from-behind victory with a two-touchdown day against the Panthers in a 20-7 road win. Even better, the Bucs’ rebuilt defense handled the Panthers. Tampa Bay looks like it could be a dangerous team on a weekly basis, and maybe – just maybe – a run at a playoff berth is possible.

Sink – Minnesota Vikings – Losing at New Orleans in the opener was forgivable, but blowing a home game, even against a quality team like the Dolphins, is a danger sign. So we’re officially registering our concern after the Vikings 14-10 loss. Minnesota has totaled just 19 points in two weeks, so even though they’ve played pretty good defense, they’re losing games. Plus, Green Bay is a juggernaut, and the Bears are off to a good start, leaving the Vikes two games behind both teams in the NFC North. The Vikings look like a borderline playoff team, nothing more, and that’s not what they planned to be when the season opened.

Float – Atlanta Falcons – We didn’t move the Falcons down after last week’s loss to the Steelers, and we’re not moving them up after a 41-7 blowout win over the Cardinals. It’s a good sign that the Falcons could destroy a lesser team, and a better sign that Michael Turner’s groin injury isn’t serious, but we’re not ready to move the Falcons into the league’s elite because of it. Atlanta needs to show some consistency before we know who the Falcons really are.